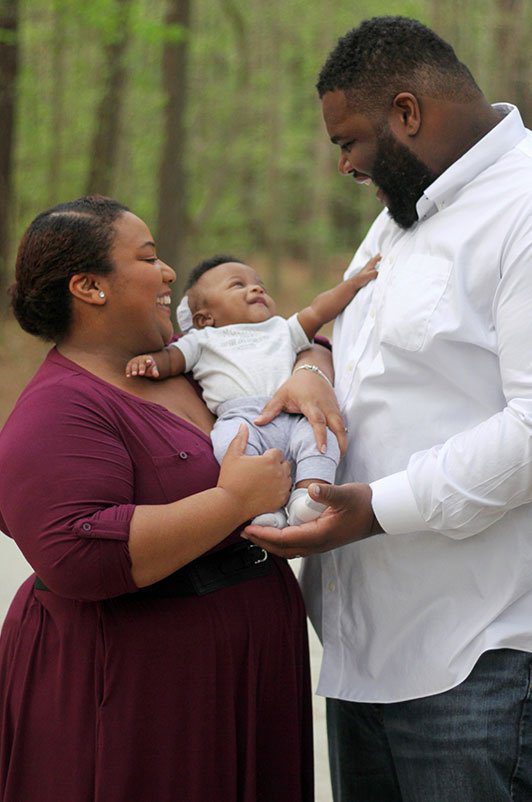 I first became pregnant in 2014. I was 29 and had been trying for a few years to get pregnant. We didn’t have any reason not to get pregnant at that point, as we could not find any issues pointing to infertility. As happy as I was to be pregnant, it was short lived as I miscarried at about 8 weeks gestation. I then went on to have two more early miscarriages in the following two years.

In August 2017, I became pregnant, but with little excitement as I knew too well the pain of loss. I had no answers as to why I had the three previous miscarriages and was unsure how to prevent the next. But, to my surprise, with close monitoring, I made it to the 8-week mark with no issues. I then went on to the 12-week mark which most women deem as the “safe” week when the risk of miscarriage drops to a minuscule level. After 15 weeks we decided to publicly announce our pregnancy unaware of the tragedy coming our way.

We were scheduled to find out the gender at my 20-week appointment, but because of an ill family member, we found out at 19 weeks instead. It’s a boy! All was well and again there was another announcement.

But one short week later, on the day of my 20-week appointment, I began to spot. Very light. I was concerned, but I knew I had an appointment scheduled so I decided to wait until my appointment to have it addressed. At my appointment, it was apparent something serious was wrong as my urine sample was completely red with blood. I had dilated nearly 2 cm.

My doctor came to see me and immediately sent me to the hospital. I was immediately admitted and given the choice to terminate the pregnancy knowing that my baby would not be able to survive or take the small chance to do everything we could to stop my contractions and possibly salvage the pregnancy and get a cerclage. I opted for the latter with no certainty that it would be successful.

After 3 hours with no signs of labor stopping, I delivered our son, Landon Wyatt Bryant, at 20 weeks gestation. He was born alive and breathing and we held him alive only a few minutes.

This was the point in time we were introduced to Heather and Kennedy’s Angel Gowns. A mutual friend connected us. A few days after returning home, there was an unexpected knock on my door. It was Heather and in her hands was a small gift bag. She said she wasn’t sure about coming over unannounced so soon after our loss and without us meeting beforehand. But God told her to go. It was perfect timing. She handed me the bag; inside was a blue glitter tree ornament with Landon’s name and birth date on it. It was the only ornament on our tree that year. Since then, my family has decided to do our best to support Kennedy’s Angel Gowns.

After a time of rest, mourning, and gathering ourselves together, Sheldon and I went through some extensive genetic and additional testing to determine the cause of our devastating loss. But before we could even get the results back from the tests I was pregnant again. Ecstatic yet terrified.
I was identified as a high-risk patient and was monitored again ever so closely. 8 weeks. 12 weeks. 15 weeks. 24 weeks pass. Not one problem. The only concern was my chronic hypertension which I dealt with in the previous pregnancy and was managing with medication. Our baby boy was perfect each step of the way.

After our experience before, we decided not to announce our pregnancy until after 24 weeks, the week of viability, knowing that if we did have him early there was at least the hope of a chance of survival. Joy was ignited in our circle of family and friends.

Again I was seen for a routine check-up at 26 weeks but because of dangerously high blood pressure and signs of pre-eclampsia, I was hospitalized for the weekend. Sunday I was discharged. Despite being stabilized and feeling good, I asked several times if I could be kept until Tuesday. I was denied. I went home and returned to my family (which my husband had just been discharged the same day from having extensive surgery on his intestines).

Early the next morning, I woke to excruciating pain in my abdomen. Not contractions, just pain. There was no blood, which I was relieved. I contacted the emergency physician and was told, “Drink a glass of water and lay down on your left side for an hour. If the pain persists, call back.” I thought this strange, especially after my history with miscarriage and preterm birth. But I gave it a try. After drinking several sips of water, I immediately threw it and everything else in my stomach up. And the pain persisted. I immediately went to the hospital.

My sons’ heartbeat had dropped to 80 bpm and my pain continued to worsen. An emergency C-section was ordered. The rest I only know from the notes from the physicians and what I’ve been told by others.

I suffered from an occult abruption which is the very worst type of complication to have. The placenta had detached in such a way that I had begun to hemorrhage, but the blood collected in a pocket between my uterine wall and the placenta like a bubble. So there were no outward signs of bleeding. I bled so much internally that after the delivery my body had lost all ability to clot the blood flowing from my body.

This medical phenomenon is called Disseminated Intravascular Coagulation (DIC). I was told by a nurse that in nursing school they are told DIC means “Death Is Coming”…I digress. This situation is one of the most common reasons women die during childbirth. I was given 22 blood transfusions and 10 units of other fluids. I also suffered an acute kidney injury, which potentially could have meant dialysis had it not resolved.

During this time of so much uncertainty, both my son’s life and my own life in balance, our family and friends surrounded us with massive amounts of love and support. Besides my family (who were already present at my admission to the hospital), Heather was the first person to show up by my bedside after my delivery. She checked on us and walked me through some of the most difficult times in my life.

Nobody understood pregnancy after the devastating loss we endured. Nobody understood the anxiety, the fear, the doubt, the disconnect, the racing thoughts, and inability to see yourself at the end with a live baby in your arms. My framework prepared me for loss. Now, I am able to move forward, with both realities as a part of my existence.

Thank you so much for the care that is given to families in such devastating times. It is desperately needed and appreciated from the bottom of our hearts. •••

Selecting infant burial garments We meet parents just mere hours or days before they have to bury...

Wave of Light at Oceana Chapel 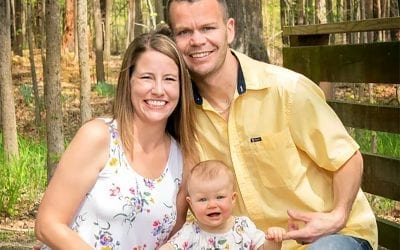